This version incorporates the new check for a term to grow at 1.5 times the overall dataset growth in place of the 2:1 Analysis:Base Year record count ratio requirement.

There is no change to the scoring calculation used in this VPInstitute version and the Calculate Emergence Indicators version executed from the toolbar of VP Student Edition or VantagePoint. The change in this VPInstitute version of the script applies to how the terms are filtered to remove “common” terms in relation to the dataset. This version checks that each term is growing faster in use than the growth of the overall dataset.

A few caveats to use it:

This script can be used to create a heat map of the technical emergence indicator (EScore) generated in VantagePoint. 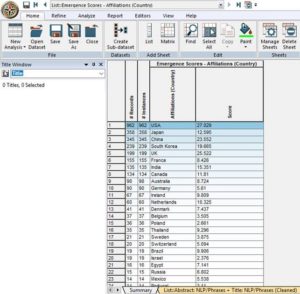 LineStrings sript useful for viewing collaborations in Google Earth and Google Maps. LineString widths are assigned sizes proportional to the number of records associated with a given collaboration (i.e. an LineString affiliated with 10 records would be twice as thick as one affiliated with 5 records).  The following instructions provide guidance for installing and using this tool. 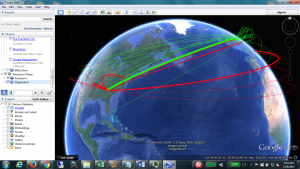 Google Earth is easy to navigate.  For a detailed list of all navigation techniques visit:

An abbreviated set of basic navigational instructions appear below:

– Use the arrow keys to scroll up, down, right or left (or click & drag your mouse).
– Scroll the mouse wheel up or down to zoom in or out.
– Press “N” to reorient the globe due-north.
– To make the globe spin about its vertical axis open World Tour.kml in Google Earth

To calculate Integration scores:
A. Open VantagePoint Web of Science data file. These can be for multiple papers (or aggregations thereof, e.g., multiple authors).
[We can calculate metrics on a per-paper or a per-author (or other grouping) basis.]
Make sure the VantagePoint file name is not too long (maybe 26 character max)
B. Check that the Cited Journal field with NAS F/R exists. If it doesn’t, import it
C. Check that the Cited WC’s field exists. If it doesn’t, run the CreateCitedWCs.vpm macro (if prompted for a field, point to the Cited Journal field with NAS F/R)
D. ** Check that each record has at least 3 Cited WC’s.
a. To check manually: in VantagePoint, generate matrix of Unique Article ID (or Author) by Cited WC INSTANCES. Paste into Excel; Sum Cited WC instances. Sort on Sum. Mark those with fewer than 3 for exclusion. I like to make a group in the ISI Unique Identifier List and check those for exclusion; then create a sub-dataset without those, and proceed using that new VantagePoint file.
E. Create a VantagePoint field that only contains the items (i.e., your set of authors) for which you want to calculate Integration scores.
** This runs on the ENTIRE field you select. You can use “create field from group” to trim down your author (or ISI Unique Identifier) field first (e.g., to select the target group of authors from among all their co-authors).
F. Run the Integration score macro. Look for the Window in which you select what to use for each input box:
a. Authors field – e.g., unique paper titles (ISI Unique Identifier works well; if you want scores for each paper in a set – a good starting point; alternatively, you can calculate an Integration score for the consolidated papers of an entity, such as an author).
b. Cited WC field (for Integration scores)
G. Results will appear in an Excel file named after the VantagePoint file and field analyzed. The “Summary” sheet will list the entity (paper ISI Unique ID or Author name, etc.) and the IDR metric(s). The Correlation Sheet is used in the calculations (see “B” above).
H. If you run again, make sure that output Excel file is first renamed or moved (the macro won’t run if it exists in place).

STEPS FOR GENERATING A VOSVIEWER NETWORK FILE FROM VANTAGEPOINT:
1. Generate an empty folder and copy a VantagePoint file of interest to it.
2. Copy Generate_VOS_Network_from_VP.vpm and Generate_VOS_Network_from_VP.xlsm to this same folder.
3. In VantagePoint run the script Generate_VOS_Network_from_VP.vpm.
4. You will prompted to select a field of interest. Select the same one selected to generate a VOS map file.
5. The script will prompt you for a network name. Give it one.
6. After it the script completes a (sparse format) VOS network file will be saved to the same folder housing the VantagePoint file you’re working with.
7. Simultaneously open the accompanying map file and network file you just generated in VOS (under the File tab).
8. The user has the option to adjust number of lines (we suggest 200) on the map, as well as their color, width and whether they’re curved or straight.

An online VOSviewer manual, which provides in-depth guidance on VOS maps, networks and manipulation the same, is available at:
http://www.vosviewer.com/documentation/Manual_VOSviewer_1.6.4.pdf

This script removes acronyms from an active list in VantagePoint by converting them into their full word form (if their full word form exists in the same list as the acronym). To use: activate a list of interest and run this script. After the script finishes a new list is created containing the same name as the list the script was run on followed by the string: “Minus Acronyms”.

In 2015 the patent informatics team at the UK-IPO were asked by the Government to produce patent analysis on over 45 different technology areas of interest to policy advisors. With a four-week deadline, such large volume patent analysis required a rethink in the way we produce analysis. The team have previously experimented with creating a number of VantagePoint scripts to help speed up specific steps within our processes for patent analysis but this project required a major step-change in how we use VantagePoint; a ‘one-click’ patent analysis that takes raw imported patent data and automates the creation of lists, applies thesauri, creates time-sliced subsets and populates a spreadsheet. It would have been impossible to deliver this work on time without automation.

The script expects the following fields to be present:

The script was generally used with datasets having many thousands of results, over a time spread of ten years. When run, you will need to select fields and enter how many results to show. You will also be prompted to save the files generated by the script when creating subsets.

The Excel template has named ranges programmed in. They are dynamic ranges which accept columns of any length, and the charts will automatically select the entire range.

It should then be ready to use. It will generate three excel files with a number of charts and tables in them.

Run with a matrix open (like Matrix Viewer)
It will ask for a base filename to save.
It will create _map and _network_sparse text files.
Those files can be used in VOSviewer to Create a new map based on a Network.

Stephen Carley (via the VantagePoint Institute) is pleased to offer a heatmap program for viewing VantagePoint records in heatmap format. Maps are rendered using a color scheme of the user’s choice, with areas that exhibit more intense activity correlating with user designated hot colors (or hotspots). The following instructions provide guidance for installing and using this tool.

The following files are also required:

NOTE: The macro below will work for VantagePoint version 9 or earlier because of changes mandated by Chromium. For those with VantagePoint or VP Student Edition version 12 or later, use the “Refine NLP” function included with the software, it provides similar functionality.

ClusterSuite is a macro which runs a series of thesauri, macros, and other term-cleaning and clustering programs to perform dimension reduction on a list, making it more approachable and manageable. It intends to minimize noise and maximize prominent topics, which enables the user to more quickly extract meaning from large amounts of text. More specifically, term clumping macros indicate (i) how closely related two or more terms are, (ii) a good name for a group that includes common terms, and (iii) the nature of the relationship between terms (e.g. parent-child, siblings, etc).

At present, ClusterSuite organizes its parts into three phases. Phase I executes five thesauri. Phase II iteratively runs a fuzzy list cleaning macro following a removal of extremely common or uncommon items. Phase III is designed to run a basic clustering macro after again removing extremely uncommon items. After the completion of these three steps, the user has the option to run an additional program to perform more advanced clustering.

Rough Guide to Dataflow in ClusterSuite

1)ClusterSuite.vpm calls the Tutorial.html (poorly named, I know) window
2)ClusterSuite runs a while loop that waits for Tutorial.html to send a window.status back to VantagePoint
3)Tutorial.html has multiple checkboxes each with their own ID.
4)When a button, such as “About ClusterSuite” or “Start” is presses, Tutorial.html updates the window.status. If “About ClusterSuite” is selected, the while loop continues to run while ClusterSuite launches another window. If “Start” is pressed, the while loop is stopped and ClusterSuite is told to record every checkbox ID with that is marked as checked. Additionally, the numbers from the Remove Extremes boxes are stored in an array.
5)The id of every checked box is stored in a giant array.
6)A for loop reads through each item in this array and executes the items in order. This prevents unchecked items from being executed.
7)Each component is executed in its own function, and the checklist is updated along the way.
8)At the end of this, the user is given the option of running TermCluster. If the user selects yes, a Term-Document matrix is created in ClusterSuite. This is then converted to Excel with a combination of a .vpm and .xlsm Matrix_to_columns macro.
9)Next, a  combination of runTermCluster.bat and .xlsm launch termCluster.jar.
10)TermCluster imports Excel, uses MySQL to store and manipulate it, and exports back to Excel

In order to use TermCluster, you first must install and configure MySQL, a free database from http://www.mysql.com/. Click here for a tutorial:
MySQL-Setup