It has been claimed that the advent of biotechnology about 30 years ago resulted in a shift in the pharmaceutical industry from an innovation system based on vertically integrated firms to a network structure in which large pharmaceuticals integrate knowledge from a variety of actors, including dedicated biotechnology firms (DBFs) and public research organisations (PROs) (McKelvey et al., 2004). In this paper, we explore whether this vertical disintegration is captured by pharma publication trends.

Methods
We have analysed the publications of the world’s 15 largest pharmaceutical firms from 1995 to 2009. This included the acquisitions, mergers, and subsidiaries of each firm using data from Recap database (www.recap.com) and the individual firm’s annual reports. We selected only document types ‘Article’ ‘Letter’ ‘Note’ ‘Proceeding Paper’ and ‘Review’. This yielded a total: 160,841 records, which were cleaned, processed and analysed using the software VantagePoint.

Results
The total number of publications by large pharmaceutical firms has decreased over the last 15 years if one takes into account the publications previously generated by firms that have been absorbed via acquisitions and mergers (see Figure 2). This total decrease in the number of publication is due to a reduction in the overall European-based output, with major decreases observed in the UK, Switzerland and France. The US and Germany maintain their total output. The number of publications by large pharma laboratories in the emerging economies has increased but still remains comparatively low (e.g. 30 pubs/year by Singapore against 1,200 pubs/year in the UK in the last 5 years). 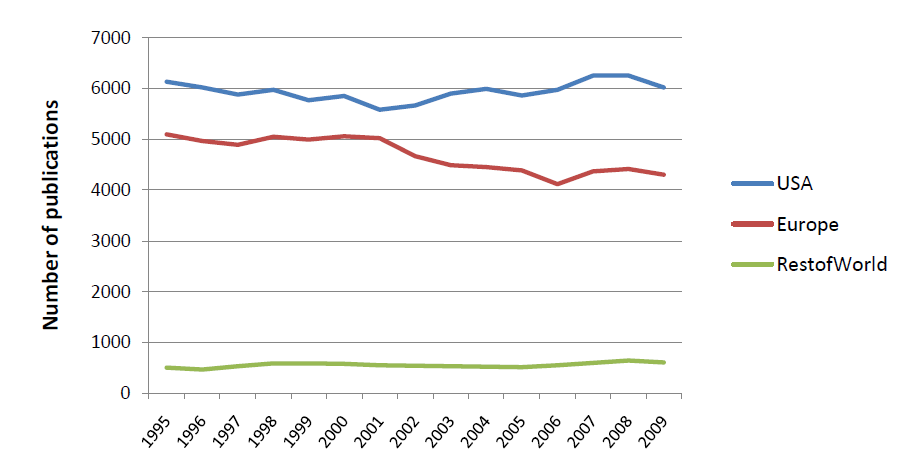 However, the percentage of pharma publications written in collaboration with other organisations has increased by about 60% in Europe and the US. Collaborations with organisations outside Europe or the US have increased more than 120% in the same period. Nevertheless, the collaborative output is still modest in developing countries: less than 120 pubs/year in China in 5 last years, compared to more than 1,200 pubs/year in the UK.
We have also tracked changes of the thematic portfolio of a firm’s research, i.e. a proxy of its technological trajectory, building on novel mapping techniques (Rafols et al., 2010). The results suggest an increase of diversity in the disciplinary portfolio, with a relative decrease of publications in the core disciplines of pharma (such as Biochemistry pharmacology), and a relative increase in more peripheral and applied areas, such as Urology, Opthmology, Psychiatry or Rheumatology.

Conclusions
This study supports the view of a shift in the search regime of pharmaceutical firms from internal R&D towards external sourcing and diversification of knowledge –as shown by the absolute decrease in number of pharma publications, but the significant increase in the number of collaborations with public research organisations. This suggests a pattern by which large pharmaceutical firms acquire and diversify capabilities by buying smaller dedicated biotechnology firms and interacting with public research, while at the same time closing down their ‘traditional’ R&D centres. Such pattern fits with recent analyses stressing the failure of internal pharma R&D to increase drug output in the last decade in spite of biotechnology promises, which is being addressed by means of externalisation of R&D activities (Munos, 2009; Stanley and Morgan, 2010).